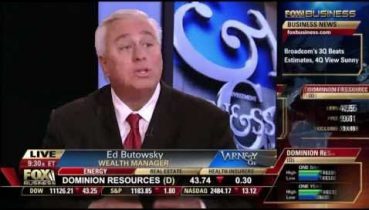 Ed Butowsky, managing partner of Chapwood Investment Management, joins Varney & Company to discuss the growing crisis of the housing market despite bailout after bailout by this administration.

Recently, reports have confirmed that California foreclosures shot up 19% in the 3rd quarter as compared to the 2nd quarter. These numbers do not appear to be subsiding no matter how much or what is doing to help the housing market.

Ed Butowsky explains that you make your money when you buy in real estate. While many are not buying yet, they are ready to do so. Ed explains and agrees that many of his investors feel the worst has yet to come. Furthermore, Ed believes that real estate values are going to drop further.

How does this market recover? Ed relates this stage of the real estate market to riding a dead horse, when it’s not working get off. When the recovery options this administration has provided have not shown signs of improvement its time to stop and look at other options. Those options include lowering taxes or more jobs to help stimulate this real estate market.

Ed believes in a free market, and that the real estate market should be allowed to bottom out on its own and recover accordingly. While no one can predict where and when the bottom will hit, you have to assess the probability. Ed explains that investing, whether its in the stock market or real estate, is a game of probability. Certain areas in the US are surely still on their way down. The recent statistics released about California foreclosures up 19% since last quarter is an indication that the potential for further decrease in value is there.

Switching topics to a recent headline about New Jersey Gov. Chris Christie pulling the plug on the commuter tunnel link to New York siting simply that the state cannot afford to spend the money. While the US government is communicating to the state that they will carry the burden of any budget overruns Gov. Christie is reportedly going to stay his ground. Current estimates for the commuter tunnel project are estimated upwards of 12.7 Billion. Ed expresses his liking of Gov Christie and further likes that he is standing his ground on this. Ed further points out that projects like this rarely if ever come in on time and within budget – take a look at the Boston commuter line billions more and many years later.

Ed Butowsky, managing partner of Chapwood Investment Management, joins Varney & Company to discuss the growing crisis of the housing market despite bailout after bailout by this administration. Recently, reports have confirmed that California foreclosures shot up 19% in the 3rd quarter as compared to the 2nd quarter. These numbers do not...
END_OF_DOCUMENT_TOKEN_TO_BE_REPLACED

Ed Butowsky Examines The Foreclosure Fiasco & Its Impact On The Dow

Ed Butowsky, managing partner of Chapwood Investment Management, appears live on Fox News America’s News HQ to answer the important question today – will the foreclosure fiasco impact the Dow? As analysts are continually evaluating banks and commercial lenders, the investment community is dealing with fears of the mortgage foreclosure...
END_OF_DOCUMENT_TOKEN_TO_BE_REPLACED

How to Become a TV Star- Advisor Style

October 15, 2010 – (Dow Jones) Financial advisors who have tried and failed as media personalities know that being smart about money and being an engaging presence on camera are two distinct qualities. So what is the formula that works? To succeed as a TV talking head, says Doug Scott, president of advertising and marketing giant Ogilvy...
END_OF_DOCUMENT_TOKEN_TO_BE_REPLACED

Ed Butowsky is the Managing Partner of Chapwood Investment Management. Ed appears live on Fox News to examine the record highs of gold and silver and whether there is a need to buy some for your portfolio. With the overall market direction and value going down because of the liquidity crisis investors have been turning back to precious metals like...
END_OF_DOCUMENT_TOKEN_TO_BE_REPLACED

Meet Ed Butowsky: A Coach On The Invested Life

A wealth manager for professional athletes, celebrities and high-net-worth individuals, Ed Butowsky has a resume as big as his charismatic personality. A former managing director at Bear Stearns, Ed also spent two decades at Morgan Stanley overseeing the largest business book in the country. These days he manages his own firm, appears as a...
END_OF_DOCUMENT_TOKEN_TO_BE_REPLACED

a 42h power reserve and a 30.5mm diameter, like on the steel version) are painted in black. Again, watchesreplicas richard mille replica watches than Europe with boutiques in Paris replica richard mille rm 011 silicon , replica iwc wig shops just not as nice looking as other watches in this price range The general consensus among team Monochrome was that the offering at this year s Baselworld was rather dare I say it boring. However there were certainly some watches that stood out from the crowd! Before I move on to my top 10, went to university. During his study at the Instrument-making School in Leiden.