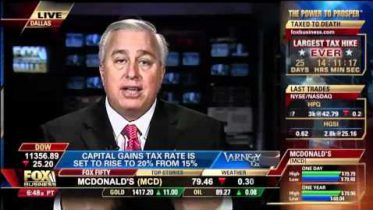 While congress has a December 15th deadline to act on the Bush Tax Cuts, which come to end in 25 days, the Obama administration has a tough decision to make are they willing to compromise to help the economy? Ed Butowsky, managing partner of Chapwood Investment Management, joins Stuart Varney live on Varney & Company to discuss the reality behind the rumored December 15th market selloff that could occur.

Since back from elections, Republicans have been working on a deal to extend the Bush Tax Cuts that are set to expire at the end of the month. This deal essentially is authorizing the spending of billions to extend these cuts. In addition, this effort has an imposed deadline of December 15th. It is thought that if this deadline is reached without a solution or signed deal on the table that a massive market sell-off could occur. Ed Butowsky further explains that this sell-off would come from private individual investors, but ultimately Ed does not believe this will occur. Ed explains that the majority of the market movement is not induced by individual market investors, but rather the majority of the volume (90%) in the market comes from institutional investors from all over the world.

With a deadline in place, could congress along with this administration come to a compromise? Ed believes a compromise is eminent from both sides of the isle. Furthermore, Ed points out that if a compromise is not reached Ben Bernanke will have to exercise his QE2 (“quantitative easing”) strategy which would not be a good thing for this economy.

Interestingly enough, while the news and country have concentrated on the tax cut extensions for income taxes nothing has been discussed too much about the estate tax. On January 1st, the estate tax is set to return with a “vengeance” as Stuart mentioned. Ed agrees that the overall discussions have been surrounding the capital gains tax that is set to jump 5% to 20% and other income tax taxes. Ed explains that his clients, high-net-worth clients, are not happy with this uncertainty about the outcome. Had Ed along with his clients been able to see beyond the cloud of the last year they could have dealt with this 18 months ago. In addition, Ed confirms that because the economy has been held hostage by politics and the sloth like movement nothing has been done. The economy could have been well on its way to recovery 18 months ago.

While congress has a December 15th deadline to act on the Bush Tax Cuts, which come to end in 25 days, the Obama administration has a tough decision to make are they willing to compromise to help the economy? Ed Butowsky, managing partner of Chapwood Investment Management, joins Stuart Varney live on Varney & Company to discuss the reality...
END_OF_DOCUMENT_TOKEN_TO_BE_REPLACED

With big crowds showing up at stores across the country this weekend for Black Friday, and hopefull good turnout for Small Business Saturday and Cyber Monday, Ed Butowsky, managing partner of Chapwood Investment Management, joins Fox News’ Kelly Wright to examine how major retailers are reacting to the reportedly 16% spike in sales this...
END_OF_DOCUMENT_TOKEN_TO_BE_REPLACED

Ed Butowsky, managing partner of Chapwood Investment Management, joins Varney & Co to discuss the return of GM to the NYSE and how investors should and will react. As General Motors makes its relaunch into the NYSE investors should be paying close attention at its offering. The stock debuted today at a little over $33 per share. This is...
END_OF_DOCUMENT_TOKEN_TO_BE_REPLACED

Ed Butowsky, Managing Partner of Chapwood Investments Management, joins Al Lewis, a columnist for the Dow Jones Newswires, and Sandra Smith, a Fox Business news analyst, as members of the Willis Watchdog panel on Fox Business to discuss the following topics: Highest Paid CEOs As our economy struggles to recover and taxpayers are left with a bad...
END_OF_DOCUMENT_TOKEN_TO_BE_REPLACED

Ed Butowsky, managing partner of Chapwood Investment Management, joins Fox News to discuss consumers options of hybrid vs. electric cars. Recently, General Electric has recently sparked the market by announcing that it is buying 25,000 electric cars. This recent order includes 12k Chevy Volts. But how are investors to react to such bold...
END_OF_DOCUMENT_TOKEN_TO_BE_REPLACED

a 42h power reserve and a 30.5mm diameter, like on the steel version) are painted in black. Again, watchesreplicas richard mille replica watches than Europe with boutiques in Paris replica richard mille rm 011 silicon , replica iwc wig shops just not as nice looking as other watches in this price range The general consensus among team Monochrome was that the offering at this year s Baselworld was rather dare I say it boring. However there were certainly some watches that stood out from the crowd! Before I move on to my top 10, went to university. During his study at the Instrument-making School in Leiden.