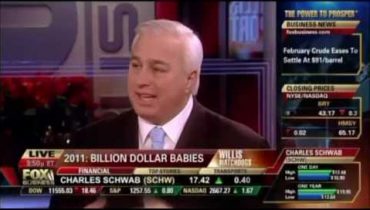 Investors are expecting a huge launch of billion dollar IPOs starting at the beginning of 2011. In comparison, in all of 2010 there was approximately $200 Million IPOs, which considering the recession is not to bad. Ed explains that in 2010 many of these companies really did not want to IPO, but because of hardships financing elsewhere they were forced into an IPO. Looking forward, the IPO push for 2011 is credible. Many of these companies that could sustain the waiting period are now ripe, and ready to go. Uri adds that while the market looks healthy this is a huge illusion. Venture capitalist are looking at their books and trying to figure out a way to get their biggest holdings off the books, and with the current state of the economy this is a prime time for them to off load these holdings. Uri points out that while the economy may be a scary discussion point, there will surely be some sort of correction whether it’s the market correcting itself of the dollar collapsing. All in all this environment for IPO’s seems like the tech bubble of days past, however Andrea believes this could potentially be good for the economy to some degree. While this administration is lacking in providing clarity and providing more gridlock than ever before, companies that IPO could yield new jobs and growth which is needed in our economy.

Almost 100 banks that received Tarp funding during the recession are facing possible failures. These banks received over $4.2 Billion of taxpayer money. Uri points out the shame in this situation. These banks are sure to fold despite the help they received, but the reality is that no one knows how many banks will really fail because of a lack of transparency. If and when these banks start to fail, this will surely have a ripple effect on the market. Uri points out that the banking industry is a good indication how the economy is doing. Ed adds that while many of the banks bailed out did in fact pay back their portion of the Tarp funding, it will be these banks that are going to fail that will test the fragility of this economy. To make matters a little worse, there are a lot of adjustable rate mortgages that are coming due over the next couple of years that will put added pressure on some of these banks that are in trouble. This should not surprise anyone and could actually double by midyear.

84 year old Hugh Hefner announced over twitter that he is tying the knot with 23 year old girlfriend Crystal Harris. Andrea points out that no one knows how much of this is reality, but they are both adults more power to them. They both know what they’re doing. Uri compares Hugh Hefner to our administration. If an 84 year old playboy has the drive to get engaged to a 23 year old, then maybe our government should take note and see that anything is possible if you have the drive. Maybe our legislature will make some serious changes for the better.

Ed Butowsky is the managing partner of Chapwood Investment Management and is an internationally recognized expert in the investment wealth management industry. Ed is also a frequent guest on other networks such as CNN, NBC, ABC, Fox News, Fox Business, and Bloomberg to name a few.

AIME ARON • THE ASSOCIATED PRESS • DECEMBER 26, 2010 The NFL and NBA players’ associations have been warning members for years to get ready for the possibility that their paychecks could evaporate in 2011. With the new year fast approaching, the unions have ratcheted up their message. NBA players were told there’s a 99 percent...
END_OF_DOCUMENT_TOKEN_TO_BE_REPLACED

Ed Butowsky, managing partner of Chapwood Investment Management, appears live on Fox News over the Christmas holiday weekend to discuss how the after Christmas shopping will help retailers. On the day after Christmas the weather in the Northeast is throwing retailers a curve ball. Retailers are banking on big after Christmas sales that may be a...
END_OF_DOCUMENT_TOKEN_TO_BE_REPLACED

While congress has a December 15th deadline to act on the Bush Tax Cuts, which come to end in 25 days, the Obama administration has a tough decision to make are they willing to compromise to help the economy? Ed Butowsky, managing partner of Chapwood Investment Management, joins Stuart Varney live on Varney & Company to discuss the reality...
END_OF_DOCUMENT_TOKEN_TO_BE_REPLACED

With big crowds showing up at stores across the country this weekend for Black Friday, and hopefull good turnout for Small Business Saturday and Cyber Monday, Ed Butowsky, managing partner of Chapwood Investment Management, joins Fox News’ Kelly Wright to examine how major retailers are reacting to the reportedly 16% spike in sales this...
END_OF_DOCUMENT_TOKEN_TO_BE_REPLACED